Do you often use Google Hangouts to chat with your friends whether it is via instant messaging, or video and voice calls? As you have probably noticed while instant messaging sessions are saved for future reference, that isn’t the case for any video or voice calls – so you won’t be able to refer to them or access them later on.

If you would like to save any of your Google Hangouts sessions, your best bet is to record it directly from your screen using Movavi Screen Recorder. Although that may sound a bit complicated, you can actually set it up in a few minutes – or less. 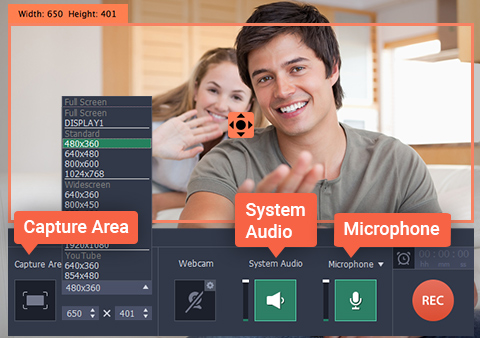 In order to set up Movavi Screen Recorder to record a Google Hangouts session, launch both apps. The first thing that you should do is set Movavi Screen Recorder to record the area of the Google Hangouts session – which can be accomplished by drawing a frame on-screen with your mouse cursor, or using one of the presets and manually adjusting the frame.

Next you should check the audio recording parameters and make sure that both the ‘System Audio’ and ‘Microphone’ icons are highlighted in Movavi Screen Recorder’s interface. That will allow you to record incoming audio from your speakers, as well as outgoing audio via your microphone.

Frankly speaking that’s really all that you need to set up, and when you’re ready you can start recording by clicking on the ‘REC’ button in Movavi Screen Recorder. After you’re done with your Google Hangouts session you can click ‘Stop’, and the video you recorded will automatically be saved in MKV format.

On top of automatically saving the video, Movavi Screen Recorder will also display it in a preview window so you can review it. In that preview window you will also be able to trim out any unwanted segments, and you can click ‘Save As’ when you’re done to save the changes you’ve made or select a different video format instead.

While that is all that it takes to record Google Hangout sessions using Movavi Screen Recorder, there are several other features that may come in handy under different circumstances. In particular you can adjust the frame rate, sound levels, capture keyboard and mouse actions, or even automate the recording so you don’t have to be present to control it.

As you can see setting up Movavi Screen Recorder to record Google Hangout sessions takes very little time and is extremely straightforward. If you have a few minutes to spare you should give it a try for yourself, so that the next time you need to record a video call you can set it up quickly and start recording as soon as possible.